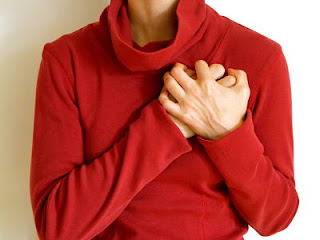 For the past 12 months or so (heavily emphasizing on the past 5 months) I have been having unexplained chest pains and serious gut problems.

About a year ago, I resumed my SCUBA diving teaching (a little too early after I had my son) and experienced acute chest pains; they were directly in my heart. They obviously scared me so I decided to go to a cardiologist and get it checked out. I got an EKG, had a sonogram done on my heart and went through a stress test- all results coming up with no sign of anything wrong. When the cardiologist sat down with me to review the results he pretty much told me I was young so I shouldn’t be having any problems. He said maybe I was having pains due to postpartum and the normal stresses of being a first time, young parent.

The chest pain did not really come back until we moved to California. In the mean time though, I was having serious gut issues. I would experience diarrhea then constipation for more than 5 days at a time. My bowel movements were never regular- ever. I eventually ended up getting a fissure (so miserable..) and dealt with a lot of pain for weeks. At this point, I had not transitioned into the diet I am on now.

Fast forward to February of this year. Diet changed and was slowly transitioning to real food.

Fast forward a bit more to June-ish of this year.

My chest pain came back. I’d get it randomly and when I did have the pain, it would be directly on my heart. The pain was dull and never long. For the periods it did hurt, the pain would sort of fade in and out. I noticed I was getting light headed real easily and sometimes I’d have to hold my hands above my head to catch a breath of air.

Throughout the summer, the pain progressively got worse. We were up at my aunt’s lake house basking in the sun when my chest pain got so bad I had to get in the pool in hopes of it going away. I told my aunt about the pain I was experiencing and she asked if it was more prevalent in the heat. I wasn’t sure so I decided to keep a close watch and remember all the times I first started to experience the chest pain. She was right! Every single time my body heat would elevate even the slightest bit, the pain would flare back up; always in the same spot. I found myself no longer being able to be outside in the heat without my heart being in pain. At this point, the pain was no longer dull, it was sharp but still would fade in and out. As soon as I got my body temperature to cool down, the pain quickly went away.

Meanwhile, my gut was seriously acting up. I would get so bloated and gassy that if I laid on my stomach I could literally feel the gas bubbling in my stomach. I thought I was infected with an alien creature or something… at least that’s what it felt like! It was so uncomfortable and the worst part was there was nothing I could do to help release the gas. It’s as if that tube (sorry for the lack of a better word) was sealed shut and I’d have to miserably ride out the mysterious creature in my gut causing all the pain and discomfort.

I knew I had to go to a doctor to get it checked out but now I am extremely skeptical about going to just any conventional doctor.  I know western doctors aren’t trained in nutrition (and a lot of problems people have are due to their diet) and it seemed like in the past, whenever I did have an issue, a conventional doctor would never find what was wrong and would just prescribe some sort of medication.

No, thank you. I think I’d rather suffer with the pain then go to a doctor that would prescribe me medication that probably has no correlation to what I’m feeling. Who knows, probably by taking that medication I’d get some other sort of problem…due to taking the prescription.

So, I searched and searched for a holistic doctor or a doctor who specializes not only in western medicine but also eastern. I wanted someone who was educated from A to Z and everything in between. I finally found a naturopathic doctor by the name of Dr. Louisa Williams. I ended up getting her name through someone at one of the booths at the farmer’s market I frequent every Sunday.

I looked her up and was happy with what I read in her description on her website, www.marinnaturopathicmedicine.com…

“Further, she specializes in the “Sankaran System” of determining the constitutional homeopathic remedy — a revolutionary new method from India that can accurately determine, and then over time, clear the plant, animal or mineral chronic “distortion pattern” that has been insidiously undermining one’s physical, mental and emotional well-being. Other “obstacles to cure” taken into consideration include the diagnosis and treatment of chronic tonsil focal infections and scar interference fields, intestinal dysbiosis (toxic gut) and major food allergies. Dr. Williams additionally specializes in neural therapy from Germany, auriculotherapy from France, drainage through gemmotherapy herbs (“plant stem cells”) from Belgium, nutritional supplementation (vitamins, minerals, probiotics and anti-oxidants), the use of isopathic remedies and cell salts, dietary counseling according to Dr. Weston Price’s research findings, and craniosacral and spinal manipulation. “

To me, anyone who is familiar with Dr. Weston Price, I’m okay with. Unfortunately, with that comes a high cost. Just to see her would cost me $210 and that wasn’t including if I needed any tests done, any supplements or any further evaluations. So, I put it off.

And put it off some more. Until…

My husband and I went to a concert and because the music was turned up unbearably loud, I immediately started to get a sharp, constant pain my chest. It was so bad we had to actually stand outside of the amphitheater for the duration of the concert. Not to mention, it felt like our ears were bleeding because of how loud it was! I don’t even understand how some of the people could handle it!

No more than a few days later my ear began to really hurt and then my jaw started to hurt. It got so bad I couldn’t even open my mouth to take a bite of food without the left side of my jaw popping and sending shooting pains up into my left ear.

That was it. That was the last string cut. I was over being in pain!

I called Dr. Louisa Williams and made an appointment. Relief, at last. I was confident that I would finally get some answers.

When we arrived at Williams’ office, she greeted my husband and I with an inviting smile and began the intensive medical history questionnaire. I don’t think I’ve ever answered so many questions in a doctor’s office before. She made sure she hit every point, from medical prescriptions I’ve taken in my life to dental procedures, even asking how my stepfather’s death affected me mentally. From that point, she checked my spine, my blood pressure and then had me lay down and did some energetic testing on me. 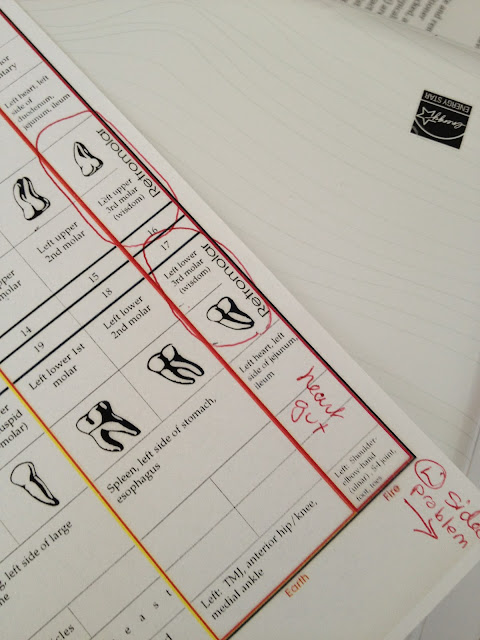 She tested the strength on the right side of my body versus the left. She found that each test resulted in my left side being weaker. Dr. Williams told me the good news was that every disruption in my body was only surface deep which indicated no signs of anything serious like cancers or heart disease. Phew. She also said it could be due to the fact that my left bottom wisdom tooth was trying to erupt completely but had nowhere to go due to no space in the jaw. This explains so much because my wisdom tooth has been half erupted for years!

She put a homeopathic drop called Notatum 4x on my left wisdom tooth which activated natural kill cells and was a natural anti-inflammatory and natural antibiotic. She had me lay back down again and did the same strength tests. Amazingly, my left side was about just as strong as my right side was! Unbelievable!!

She concluded that I had a dominant focus in my left wisdom teeth which had a direct correlation to disruptions on the left side of the body, emphasizing on the heart and gut.

I always knew if one thing in your body was disrupted, it would affect other things in your body but I never could have imagined that my wisdom teeth would make my chest and gut have issues.

She went on to say that it was sort of like chinese torture. If you were to put pressure on one single point in your body and leave it there, the area would get inflamed. Then your body would try and figure out what was going on, therefore overworking other areas of your body.

She even explained that was the reason why I was having left sided ear/jaw issues, an unexplained random left foot pain and probably why when I had all the tests done a year ago at the cardiologist that they all came up negative. I guess most western doctors aren’t familiar with this but if you were to go to a German doctor they would immediately tell you it was because of the wisdom teeth.

Fascinating right? And what a relief to know it was nothing serious!

The cure for my chest pain is to get my wisdom teeth pulled. She referred me to a holistic dentist because she said during the surgery, instead of just removing the teeth and getting out of there, the dentist would actually scrape out all the infection and bacteria that may be in the bone. This way, the jaw bone could regrow back with nothing in there to create future problems. Dr. Williams pointed out that after the surgery, all my problems should go away!

I’m so blessed to have found Dr. Louisa Williams and have finally got an answer for my unexplained, annoying chest and gut pain! Thank you Dr. Williams! It just shows you, sometimes you’ve got to think outside the box!

'Finally, Answers to My Unexplained Heart Pains and Gut Issue' has 1 comment