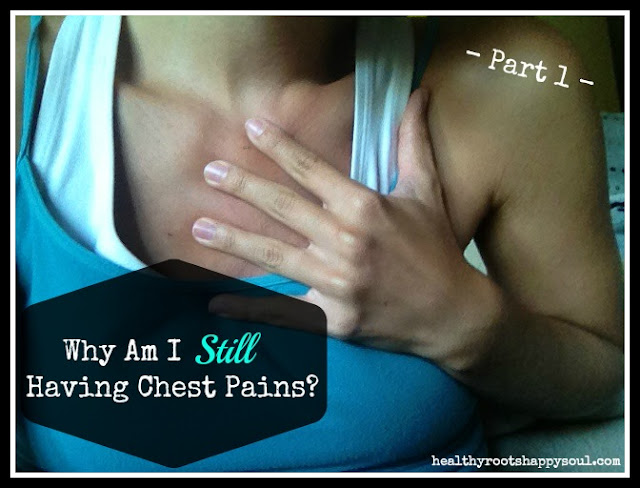 A few months ago I wrote a post called Finally, Answers To My Unexplained Chest Pain & Gut Issues. To sum it up to you in this post, I started having really bad chest pains that only became noticeable if my body temperature was elevated (standing outside in the hot sun, sweating, etc). It got so bad that I couldn’t even take a shower or wash my hands with hot water without getting the pain and having it shoot down my left arm. I went to a naturopath doctor and she told me I had to get my wisdom teeth pulled because there was bacteria in there. The bacteria sitting on my half way erupted wisdom tooth was causing a disturbance in my heart. I got them extracted and no longer had the chest pain but we went into the winter season so I wasn’t sweating much or getting exposed to high heats.

I thought I was completely cured until I was in the Florida heat a couple months back and started to get a strong pain in my chest.

I couldn’t believe it! How could I still be having pains? I had to quickly get in the A/C and drink lots of water because I felt a little woozy.

When I got home from vacation in Florida I thought that it may have just been a fluke. Then we had a couple weeks of hot weather and every single time my body temperature rose, the pain arose. It started on top of my chest and radiated down my left arm. If I cooled myself down I’d still feel some sort of residual achy feeling lingering on top of my heart.

I was so frustrated.

We arrived to the location of the Survivor Mud Run and it was starting to get really hot outside. I was getting a little anxious because I didn’t want my chest to start hurting before I had to run. Our wave left at 11:45am but due to a minor medical emergency with a friend we were running with, we had to run the next wave at 12:00pm. While our friend got things situated, Scott and I had to wait in the heat. Within minutes, my heart began to hurt and I had to quickly find water and shade (there was barely any shade). I was able to cool down a little but the pain was still noticeable. Luckily, they had showers so the runners could wash the mud off after the race. I ran over there and rinsed my whole body. Almost immediately I felt better. If it weren’t for the showers I probably would not have been able to start the race.

That was the last straw. I had to revisit Dr. Williams or else my life would seriously be put on hold.

I can not begin to tell you how frustrating it is to have something that no one else has ever heard of– although I’m sure there are some of you out there who can resonate with what I’m saying.

Before I made my appointment, I began asking questions to people to see if I could heal myself. I wasn’t having much luck as no one had heard of such a thing. A lady that I have befriended at one of the farmer’s market booths (a holistic dentists and herbalist) suggested maybe there was bacteria still left in the pocket where my wisdom teeth was. She suggested going back to Dr. Williams and seeing if that was the case.

A Trip to the Naturopath

I arrived at Dr. Williams’ office wondering what kind of answers I would receive or be left with. Did I still have bacteria in the cavity and that is what was causing the continued pain? Or was it something deeper?

I sat on her table and the first thing she did was measure how far I could open my mouth. When I saw her the first time I could only open my mouth up to a 22 (I’m not sure if this is centimeters or millimeters). This time, I measured a 40 which is considered normal. It gave me a sense of relief and confirmed she indeed knew what she was doing. If I hadn’t extracted my wisdom teeth, I’d probably be measuring lower than a 22.

She then had me lay down on my back and testing each side for strengths using an energetic testing. According to Dr. Williams’ Radical Medicine website she states this about energetic testing-

“The term “energetic testing” is an umbrella-like term to describe various techniques that interpret the body’s various signals-muscle strength, arm and leg lengths, acupressure points and energy fields-in order to arrive at a more precise diagnosis and effective treatment. These methods have the benefit of directly testing a patient’s body in present time, as opposed to attempting to interpret often days, weeks, or months older radio graphs and laboratory tests.” (source) 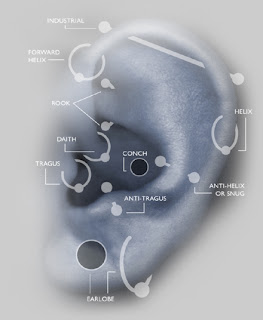 When she preformed the test on me, my complete left side was weaker than my right which did not come as surprise since I was still having pains in my chest. She waited a few moments and checked my body to see if I had any jewelry on. The only body piercings I have are my two ear holes and one on top of my ear. She pointed to the one on top of my ear (forward helix, locate it on the diagram to the right) and asked if I could take it out.

Ummmm…. I hadn’t taken that earring out in over 5 years! It was still the one that I got my ear pierced with. I asked if it was necessary and she said yes. So, I headed into the bathroom with tweezers that were by no means heavy duty and pulled at my earring… several times. It took me about 10 minutes of struggling and yanking but in the end, I got it out. Success!

I laid back on the table and she tested my strengths again.

Guess what? Both sides were equal……

If you want to read more about the unexpected discovery, please come back tomorrow. This post ended up being way longer than I had anticipated. For your reading pleasure, I have split the posts in half.

'Why Am I Still Having Chest Pains? The Unexpected Discovery [Part 1]' has 2 comments